It was a twofold attack of the flab.

Source: Reflections on “So You’ve Been Publicly Shamed”

Source: Top Vintage and quirky places to visit when in Bruges

In space, no one can hear you donate.

That’s what we are now.  After thirty years of vegetarianism and thinking that actually meant we were adopting a cruelty free lifestyle – we realised it wasn’t.

So we sat for a harrowing couple of hours in front of the Earthlings documentary – actually I could only get to the first twenty minutes of what is effectively an animal torture slash movie, Tim managed to get a bit further.   If you need to feel despair at mankind for a few hours give it a go.  If you feel like a bacon sandwich after that you can take yourself off any friends list of mine.

Then we watched cowspiracy which is about global poverty,climate change and the farming industry which attempts to  show the inefficiency of land use,feeding cows grain and water to create one foodstuff (meat) compared to how much  better those resources can be used.

Someione also recommended to us to watch forks over knives but to be honest, there’s only so much stuff like this that you can take in a weekend.

Anyway, we trundled morosely or should that be (Morrissely ?) to the PETA website to send for our vegan pack.  I was hoping we’d get a little balaclava to start breaking into laboratories but we just got a magazine (paper- kind, not ammo).

And that’s it -we are officially vegan.  There’s loads of great recipes online and we like making new meals but I am having to fight despising people who choose not to find out about the meat and dairy industry.

People are entitled to their “informed” opinions – if you have watched daisy the cow being shot in the head with a bolt after her shortened life of being used as a milk making machine and pigs (smart as dogs by the way – but not smart enough to be cute and furry ) being lame and squeaking in fear as they see their fellow pigs killed ahead of them) – and still think it’s fine to eat meat, then by all means tell me to fuck off.

Bruges has to be one of the prettiest cities we have ever visited.  It is compact enough to wander without the need for Transport.  We visited using the Eurostar to Brussels and then by train to Bruges.   On arrival at the station there is probably no need to book a taxi if your hotel is in town as you only need to head towards the spires you can see from the station.  Travel light as you want to save room to fill your bags with chocolate for the return journey. 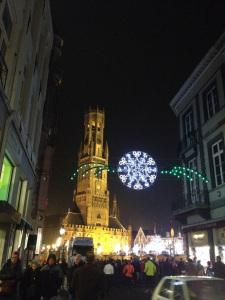 There are maps placed around Bruges which makes navigation easy, although they are deceiving as the scale makes the city seem much bigger than it is.  You think somewhere is quite a distance only to stumble upon it easily. The belfry, the huge spire in the middle of town where you can climb the 366 steps for a view…